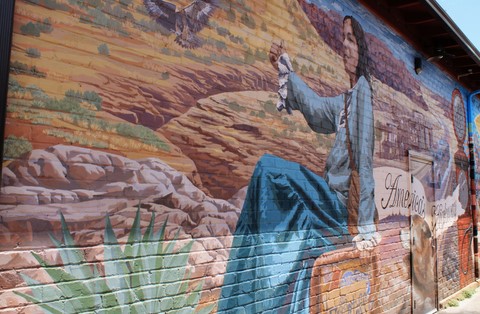 This is an authentic and atypical mountain town. Its city centre half Mexican half European, interspersed with red sandstone small buildings and brick façades with Spanish style pediments, gives it a certain charm. Murals are splendid. Cafes and restaurants proudly display their originality, as well as western hotels and outdated cinemas from the 1930’s. Saloons line the famous Route 66.
Nestled in altitude in the middle of a ponderosa pines forest massif, it offers a pleasant coolness in contrast to the desert furnace. Known as «the crossroads of Arizona», it is much more than a simple stopping-off point to visit the exceptional natural sites, sights and monuments nearby. Many travelers pass by all year long, but it attracts as much hikers and skiers as tourists and nature lovers.
It was unconceivable for us not to return there, for the hot memory of that unforgettable and unexpected night we had there in June 2013 was still inside of us. So we definitely adopted it as one of our favorite cities. Indeed, the question remained because we wondered whether we had not let our passion carry us away after those unforgettable moments. But we had the opportunity to linger in its streets one night as it was almost deserted, and we were delighted to see that it kept an undeniable character in spite of it all.
We had confirmation of that the day after when we stayed there a few hours in the afternoon, soaking up with its very pleasant atmosphere. It was the first time we visited it by day and we really enjoyed it. We discovered new places, among others the very typical western railway station and its surroundings. Murals there are extraordinary, especially the one that covers a long brick wall on Phoenix Avenue, at the corner of San Francisco Street (photo). It is decidedly one of Flagstaff’s specialties. And then, we went to lunch at the shaded terrace of «Flagstaff Brewing Company» on the famous Route 66 in front of the railway station. Dishes and home-made beers are high-quality, and the place is very pleasant.
We made a stop-off in the heights to get close to the Lowell Observatory, which was founded by Percival Lowell. There were discovered Pluto and the Uranus rings. The big Telescope Clark from the late 19th century fitted with numerous focusing wheels will bring you back to a Jules Verne’s novel. You will be able to observe the moon and, when conditions are favorable, some planets of the solar system. You will also visit with enchantment the Percival Lowell Mausoleum, the Rotunda Museum, the exhibition room and the multiplanetarium. As for us, we only took a walk in the park that offers a nice bird’s eye view of the city. Indeed, we only had a little time and paying the entrance to the observatory was not worth.
Finally, after we saw Flagstaff from various different aspects during our two visits within three years, we know it better and love it more. Like we did in 2013, we left it with a twinge of sorrow to make our way to the extraordinary Grand Canyon. 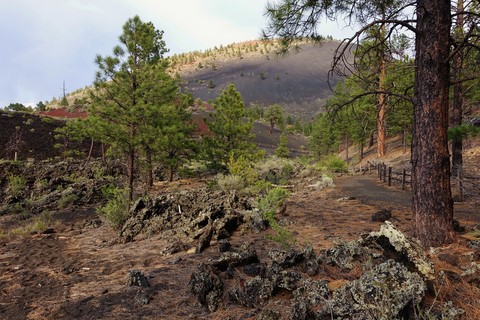 It is the nearest park to Flagstaff. Its last eruptions date from the 11th and the 12th centuries. The spectacular lava flows covered the place, giving it its entire characteristic. The superb Lava Flow Trail (photo) allows you to cross that scenery out of the ordinary. If you have the will and if you are in condition, you will be able to take on the hard ascent of the Lenox Crater Trail. A reward waits for you on the top: the view of the San Francisco Peaks.
We contented ourselves with the trail. Black clouds started to come our way, but without blocking the sun, which covered that amazing landscape with beautiful colors. And then, we took the car to go and admire the view from Cinder Hills Overlook, from where we could see the Painted Desert in the distance.

It is located in the heart of a desert expanse that includes several constructions and ruins which witness the past presence of Indian tribes. They took advantage of the fertilization of the soil by volcanic ashes of Sunset Crater, quite close by. Besides, the visits of those two sites are coupled together. Don’t miss the Wukoki Pueblo, red rock fortress, and the Wupatki Pueblo, village that includes the remains of ancient houses. That night, the stone stood out beautifully thanks to a setting sun under persistent clouds that granted us with blazing warm colors.

It is a narrow canyon made more attractive by pines on cliffs that include Sinagua tribe’s troglodyte houses. Their lifestyle is basically presented on a short movie in a little museum. To see the ruins from close, you must take the superb Island Trail, which disappears into the canyon, forming a long loop around a rocky peak. That was what we wanted to do but unfortunately, it was under construction. So we fell back on the Rim Trail (photo) that runs along the fault and allows you to see the ruins from a distance. 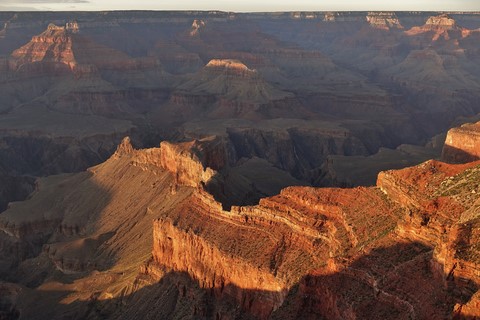 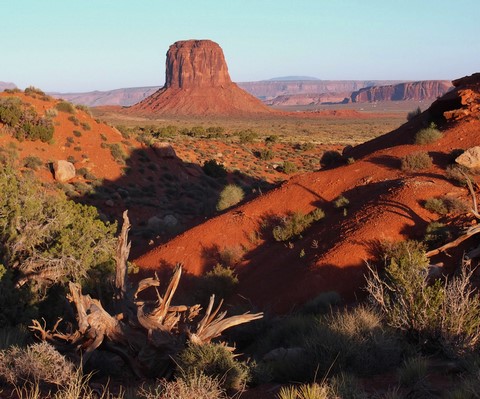 Grandiose and magical landscape, its colors are beautiful at sunrise and sunset. Located in the Navajo reserve, it is one of the strangest sites created by nature. From this vast valley of earth and pink sand rise mesas, flat-topped monoliths with vertical rock faces, as well as «cathedrals of the desert», impressive rocky peaks. Some of these extraordinary formations are erected skyward at a remarkable height, and sculpted into fantastic vertical shapes.
Moreover, the place is legendary because many movies were filmed there. Of course, we think of westerns, including those from John Ford. But we had especially «Thelma & Louise» in mind, which among other things made us want to visit Monument Valley and Western America in general
The Valley Drive track threads its way through these huge rocky blocks dotted about the desert. It takes about 2 hours or 2 hours and a half to cover the loop. It is preferable to venture there with a 4-wheel drive vehicle. The use of an ordinary car is allowed and possible, but requires the utmost caution, and a slow and smooth driving.
We were able to admire that site out of the ordinary at sunset just after our arrival, the same day we contemplated Grand Canyon at sunrise. We were conscious of our great privilege to have brought together in one single day the visit of the two inevitable national parks in Western America, moreover at times of day when they display all of their splendor. The spectacle was magical, with a breathtaking beauty. The warm and bright colors of sand, mesas and «cathedrals of the desert» contrasted with the shade they cast to the ground.
We stayed once again in the View Hotel, which is located inside the site. From the balcony of our room, we had the impression we could touch the «cathedrals of the desert» with our fingertips. The entrance hall is a patio with a fabulous and very typical decoration: magnificent photographs and paintings on the Wild West theme, rugs and Navajo art objects.
As we were always eager to see more, we woke up very early to admire once again the site at sunrise, and the magic of the place and the moment was indeed still there.
Before we leave definitively Monument Valley to go to Moab, Utah, we made a last stop at Goulding’s Lodge, located in front of Rock Door Mesa. More than a lodge, it is a very small village with dwellings, of course, then a Navajo Museum, a gift shop, a theater, a restaurant, a swimming-pool, a grocery, a gym and a gas station. For western fans, the visit of the John Wayne’s Chalet is inevitable. A period cart and a period diligence complete the picture.
Finally, an important detail: be aware that in Navajo territory, mostly located in Arizona, there is a + 1 hour time difference compared to the rest of the state.