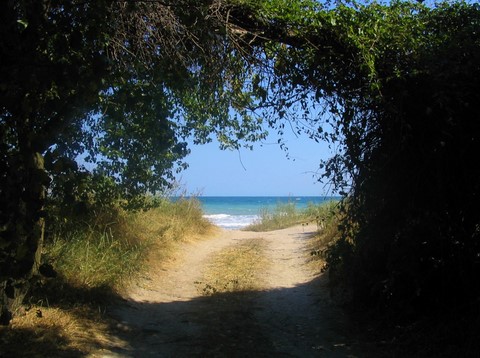 The day after our arrival, we took the road to the north to reach the beautiful Cape Kaliakra site. We were driving in the heart of a wild an authentic landscape, notably along those superb sunflowers fields with the Black Sea in the background. The panorama was tarnished in rare places by modern structures under construction. We headed for one of them as we saw a big sign that indicated Cape Kaliakra to the right. It was not a road sign, but rather a touristic sign inviting to visit that remarkable place… at least it was what we thought.
So we turned right without thinking to drive along a filthy dirt road which crossed a desert area where some cows were scattered, raising a considerable amount of dust. It did not catch our attention… no more than the incoherence of the covered distance and the road time, knowing that we were supposed to arrive later. We found ourselves in front of a future residence or a future hotel complex - precisely with the sweet name of «Cape Kaliakra» - that was under construction. The building site was ultra secured and we were facing a military man with an assault rifle. When he saw us coming, he just could not believe it. Actually, we were still kilometers away from the site to which that future complex borrowed its name. So, as we realized our big mistake, we made a U-turn raising much dust once again. The military man must have liked it… We drove in front of the cows again; they were staring at us with a disconcerted look. Even they had figured out that place had absolutely nothing to do with the real Cape Kaliakra site!

Two days later, we were driving on the coast near Balchik, when we saw a sign for a small village on a narrow road leading to the heart of a forest on the seafront (photo). As we were intrigued, we decided to go there, disappearing into the pleasant shady wood. Once arrived, we saw a few cars parked in a clearing, and then we parked as well. As we got out of the car, we saw a man at the entrance of the tiny village shooting on cans with an air rifle with a few friends. The narrow path they were standing on was the only access. We had no other choice than passing close to them.
As he saw us approaching, the man with the rifle started facing us, holding his weapon close to him, the barrel headed skyward, looking askance at us with his friends. As we were walking on, slightly ruined buildings appeared behind the trees, including a school on one side, the City Hall on the other. We had the impression of finding ourselves in a disreputable community, isolated from the rest of civilization, such as the unfortunate heroes from «The Texas chainsaw massacre», «Hostel» or «Wrong turn».
Of course, all that is just our frenzied imagination. Those people’s attitude was rather some kind of game to intimidate us. During our travel, the Bulgarian people were friendly and welcoming, one of the reasons why it was one of our best trips.

The penultimate day of our trip, we were driving quietly to Madara. We took a secondary road full of potholes lost in the countryside. We only met a few vehicles… and there were almost no road sign, so that we wondered whether we had taken the right way. As we had no GPS, we stopped on a wide stony shoulder in a bend to take a look at our map. That is when we saw faces appearing behind the bushes: nice feminine faces… Then, those charming persons got closer to our vehicle. Their tempting outfits and their winning smiles left no doubt about their intentions. We managed to stop exactly at the prostitutes’ favorite stop along that endless desert road! Certainly, they were beautiful, like many women in Bulgaria. The proposed rates were very cheap, which made the price-quality ratio highly advantageous. However, we nicely made them understand that we had not come for that. In front of the language barrier, we limited ourselves to show them our map. So, they understood and took leave of us. Sometimes, simple gestures are more meaningful than words.

The day of our departure to Bulgaria, we were supposed to take the flight Bordeaux-Varna. However, it was cancelled a few days before because it would have been taken by... two people!... Dom and J.R.!.. Indeed, we were the only ones to have booked on that flight. As a result, we had to pass through Lyons. Two hours of waiting time for the outward journey... five hours for the return!... A real torture! The more as we had to reach the Varna airport previously at 5 A.M. for a departure at 7 A.M. Instead of going to sleep and getting up early, we decided to party all night and take our flight just after having a good shower in the hotel.Moreover, we were afraid we could not take it, because as we were at the check-in desk, a French activity leader from the Agency «Plein Vent» came to us, explaining in an almost inquisitive tone that we could not take that flight if we were not on his list.
We were speechless. First, what business is it of his? Since when a flunkey from a French travel agency lays down the law in the airport of Varna in Bulgaria? How to make that nice man understand that he was merely a puppet wearing a ridiculous red polo shirt and a ridiculous cap - both stamped with the logo of a travel agency that was moderately known even in his own country - and that it was certainly not up to him to decide who boarded or not an airplane?.. As it was mission impossible, we just told him that we did not travel with «Plein Vent» but with another agency. It seemed he did not want to understand, but fortunately we were on his list. For what obscure reason, we will never know. But no matter...
We reached Lyons on time, but we were obviously very tired. So, we could not resist as we saw deckchairs on platforms for the promotion of future flights from Lyons to New York. We slumped in them near a pasteboard Statue of Liberty in order to recover some of the lost hours of sleep while waiting for the connection.
Anecdotally, our travel agency upgraded us to a 4 stars hotel as a goodwill gesture further to the cancellation of the Bordeaux-Varna flight. It was the Golden Beach in Zlatni Piassatsi, beautiful hotel where we spent an unforgettable stay, and where we sympathized with activity leaders and travelers, some with whom we kept in touch. It was fate...