Croatia
You can click on pictures to enlarge them 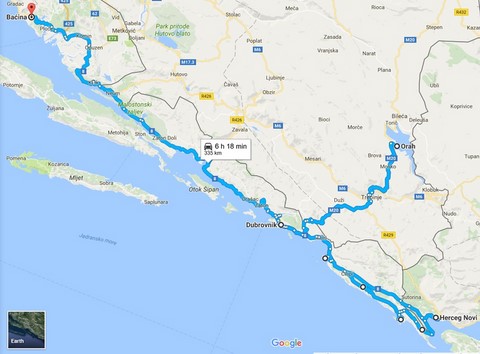 In 2007, we decided to go to Croatia. Indeed, Dom had already been there in 1979 when it was still part of Yugoslavia. From the top of his 9 years, he kept an unforgettable memory of his 3 weeks journey on Rab Island. So he wanted to go back there, choosing Dubrovnik this time around.
On this trip, we took a ride to Montenegro, and we must admit that the checkpoint on the border threw us a cold: a man in uniform armed with a submachine gun searched the vehicle after having kept our passports for a long time. Arrived at Herceg Novi, we had to face a few hostile glances, for our car rental was registered in Croatia. Then, we had to face the facts: the scars of the war were still present. That's what we also realized with horror taking another ride to Bosnia, particularly stricken. It is all the more regrettable that former Yugoslavia is full of remarkable landscapes and cities.
The Croatian coast, for its part, is composed of deserted creeks, countless islands bathed in turquoise and transparent water, and typical villages with cobbled pedestrian streets. The significant amount of cypress is explained by the subsistence of a local tradition: every marriage, the man plants twenty-four of them in order to bring the couple fertility.
On the other hand, you can only find shingle beaches. Some of them have large plates of concrete fitted out above the rocks with swimming pool ladders to access to water. What locals call «sandy beaches» are actually stretches of much less big pebble, close to gravel, such as e.g. in Dubrovnik.
Finally, we returned to that nice country in 2010 from Slovenia for a few hours excursion in the Istria region.

Dubrovnik, «the pearl of the Adriatic», former Ragusa, is a medieval walled city with an historic centre bounded by imposing ramparts. It blossoms with charming climbing cobblestone streets, churches and cloisters. It opens to the rest of the city by sumptuous gates. Terraces are constantly animated by a young and light atmosphere. The visit of the ramparts offers a stunning view of the Adriatic. The small port is located in a beautiful creek bathed in ochre rocks.
The famous summer festival Libertas takes place in July and August in an amazing Baroque and Renaissance setting. Literary works are in the spotlight, as well as dance, Ballet and music, as much medieval as contemporary. The opening ceremony firework above the harbor is breathtaking.

Lapad is a superb bay near Dubrovnik, from where you can admire the sunset in a sweet summer atmosphere. The Adriatic Sea is smooth as a mirror. The last swimmers enjoy the calm and the space which is offered to them, inconceivable thing in full day. Croatian children skim pebbles in laughter and joyful cries. The part of the bay which is nearest to the long pedestrian walkway lined with bars, restaurants and shops has a beach where pebbles are much less big.

Zaton, typical fishing village is located a few kilometers north of Dubrovnik. Its pretty bay is surrounded by high mountains of the Dalmatian hinterland. Many villas adorn the seaside.

Cavtat is a charming medieval harbor city. The setting is very nice and very quiet. Its microclimate allows the presence of subtropical plants. It has many monuments of Renaissance with traces of Gothic style : palace, fortifications, churches and convents.

Molunat is a fishing village located at the southern end of the Croatian coast. We discovered it unexpectedly as we had lost our way. Indeed, you often come across extraordinary and not frequently visited places when you get lost.
Traces of the past are present, as archaeological sites in the sea bed and onshore, ramparts and fortresses. The very indented coastline has many creeks and peninsulas and two islets covered with a thick scrub, holm oaks, cypress and pinewoods. The clear waters abound in fish. Nature is very preserved.

The Baćina lakes are a set of 6 freshwater lakes linked together in the heart of a valley. They are located close to the village of the same name, near the harbor city of Ploče. You can see them below from the road and the parking. Refreshing colors of green and turquoise mix in pleasant and varied greenery from which the inevitable cypress stand out. Some of them are adorned with small pontoons and huts on the shore, which adds to their charm. It is a peaceful, idyllic and not very frequented place. You can join them since Dubrovnik by a road that runs along the coastline, offering a breathtaking view on the Adriatic coast. It crosses a few kilometers long part of Bosnian territory. But the border crossing is a mere formality, nothing to do with the check-point between Croatia and Montenegro referred to in the introduction.

Motovun is a very nice fortified stone village perched on a hill more than 200 meters high. Motorized access is not permitted, which makes the visit all the more pleasant. The view of the Istria Valley is breathtaking. Ramparts from the medieval period, the Saint-Stephen Church, a crenellated tower provided with a bell and a sumptuous palace make it an unforgettable place.

Opatija is located on the shore of the Kvarner Gulf. Blazing with the charm of Neo-classical seaside resorts, it did manage to protect itself from the building up to remain attractive and keep the nostalgia from an Austro-Hungarian bygone period. Pastel colored stylish villas strung out there in the heart of lush and exotic gardens. There you have a feeling of well-being and get the impression of being back to the 19th century during a very short trip.