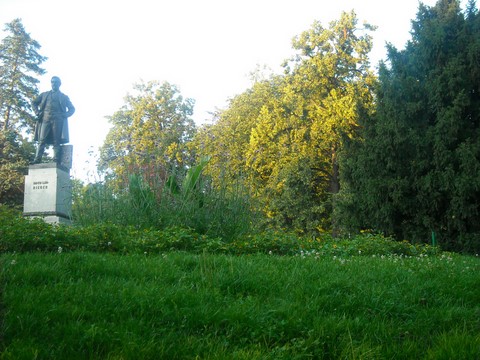 In 2009, we decided on whim to go to Czech Republic. Indeed, we had planned for several weeks to visit Amsterdam. Just before we book our trip, we consulted the catalogue «Visit Europe» to settle the last details before we go to the travel agency to book definitely. As we were flipping through the pages, we realized that a stay in Prague with a flight from Paris was less expensive than a trip to Amsterdam with a departure from Paris by train. As we had a limited budget, we changed completely our plans at the last moment to sketch hastily a draft for a stay in Czech Republic just before we book in the same agency.
The discovery of Riegrovy Sady Park (photo) was the result of a pure coincidence as well... or rather the result of destiny once again. We had booked a hotel in the Žižkov district, without knowing that it was almost three kilometers away from the city center. On the map of the «Visit Europe» catalogue, it seemed close to the Old Town. But those ones are often misleading because they are very schematized and they do not include necessarily the scale. We were disappointed at the beginning, but we tell ourselves in hindsight that we would have never discovered that neighborhood and specifically that park if we had not made that small mistake. It would have been a pity because we spent memorable moments there.
Decidedly, that trip to Czech Republic was really marked by the unexpected.

As we were returning from Prague to Paris, something hilarious happened at the very beginning of the flight, just before the take-off: the plane began to gain speed on the long track. Everyone had carefully fastened his seat belts: travelers, stewards, hostesses... Everyone except a young man with the look of a hippy, who found nothing better to do than getting up at that moment to go to the restroom, looking casual and walking with a nonchalant tread. His glassy eyes reflected the recent taking of illicit matters.
We thought the aircrew would give him a stiff telling-off, but in view of the surreal side of the situation, nobody reacted.