Flagstaff, «the crossroads of Arizona»
You can click on pictures to enlarge them

The choice of including this lovely town of Western America in our favorite cities may seem surprising, for we only spent a few hours there. But we fell in love with it. Its authenticity, its old-fashioned charm and its atmosphere immediately appealed to us. There we spent a memorable night, made of  meetings and fortunate unexpected events, which details are mentioned in the rubric «Our anecdotes - USA».
We plan to return there in June 2016 during our new trip to the USA, for a longer stay this time. Then, we will know if this sudden love was just a flash in the pan or if it was made to last. 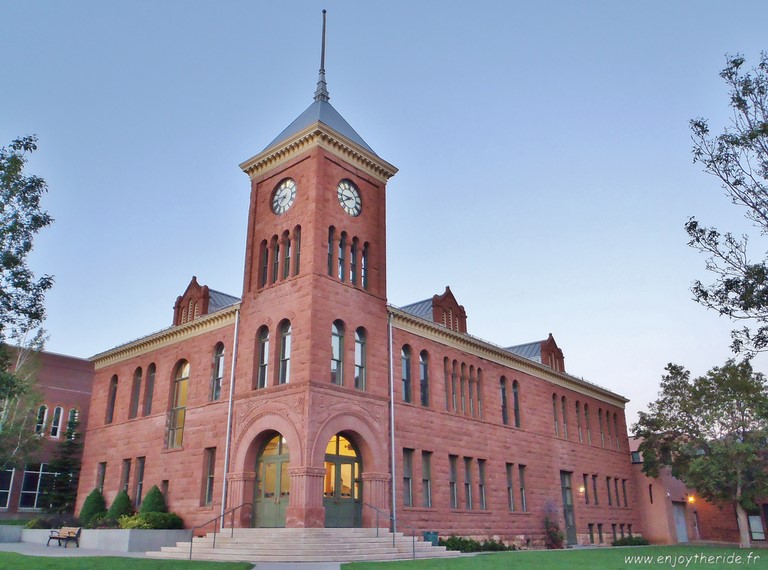 The city of Flagstaff 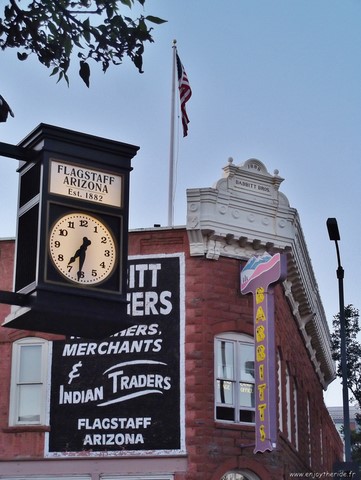 Nestled in altitude in the middle of the biggest ponderosa pines forest massif in the world, Flagstaff offers a pleasant coolness in contrast to the desert furnace. Known as «the crossroads of Arizona», it is indeed relatively close to exceptional natural sites such as the  major Grand Canyon and the fascinating Petrified Forest.
However, it is much more than a simple stopping-off point to visit those remarkable sites. And for a very good reason! «Flag» is an authentic and atypical mountain town. Its city centre half Mexican half European, interspersed with red sandstone small buildings and brick façades with Spanish style pediments, gives it a certain charm. Murals are splendid. Shops, cafes and restaurants proudly display their originality. Crossed by the mythic Route 66 – lined with saloons in the heart of the town – its old-style diners, its outdated hotels, motels and cinemas from the 1930s give it a quaint charm which calls for nostalgia. And how about the endless freight trains that still cross the town at any time? Indeed, though they are lately no longer allowed to hiss, they bring us back inevitably to westerns that rocked our earliest days.
Many travelers pass by all year long, but it attracts as much hikers and skiers as tourists and nature lovers.
The Lowell Observatory was founded by Percival Lowell. There were discovered Pluto and the Uranus rings. The big Telescope Clark from the late 19th century fitted with numerous focusing wheels will bring you back to a Jules Verne’s novel. You will be able to observe the moon and, when conditions are favorable, some planets of the solar system. You will also visit with enchantment the Percival Lowell Mausoleum, the Rotunda Museum, the exhibition room and the multiplanetarium.
The visit of the Museum of Northern Arizona is very rewarding for it will teach you much about the Colorado Plateau, as much in the ethnologic and archeological area as about fauna and geology. It has numerous and superb collector’s items. 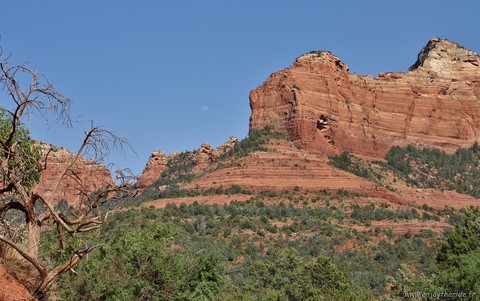 The magnificent landscapes of Sedona (photo), greener and less dry than the surroundings, attract almost as many visitors as the Grand Canyon. It is an authentic village, which inhabitants are close to nature. Its architecture is both sober and typical, with no squared streets.
Some of you may be disconcerted by the «New Age» spirit that reigns over there. Indeed, many people are attracted to a so-called point of convergence of various fluxes of energy, which would be exactly in Sedona. But don’t worry; you don’t need to adhere to that mystical mind to enjoy fully a stay in that picturesque place.
The road between Flagstaff and that small town is superb, in the middle of very deep high mountains covered in conifers. Red mountains of Red Rocks - that you can climb - rise with a thick layer of vegetation in a remarkable contrast. The greenery of Verde Valley covers mountains. The area abounds in picturesque viewpoints.

Sunset Crater is the nearest park to Flagstaff. Its last eruptions date from the 11th and the 12th centuries. The spectacular lava flows covered the place, giving it its entire characteristic. The superb Lava Flow Trail allows you to cross that scenery out of the ordinary. If you have the will and if you are in condition, you will be able to take on the hard ascent of the Lenox Crater Trail. A reward waits for you on the top: the view of the San Francisco Peaks.

The Wupatki National Monument is located in the heart of a desert expanse that includes several constructions and ruins which witness the past presence of Indian tribes. They took advantage of the fertilization of the soil by volcanic ashes of Sunset Crater, quite close by. Besides, the visits of those two sites are coupled together. Don’t miss the Wukoki Pueblo, red rock fortress, and the Wupatki Pueblo, village that includes the remains of ancient houses.

Meteor Crater, which name is particularly meaningful is one of the biggest and most spectacular meteor craters in the world. Its diameter (almost 1300 meters) and its depth (more than 170 meters) will leave you speechless, the more as the presence of a roll of stone only allows you to see it at the very last moment. The crash was so violent that secondary craters formed as a result of the breaking up of many rocks. Nearby, a museum offers you pictures, movies, animations and documents about meteors, craters and more generally about space conquest.

Walnut Canyon National Monument is a narrow canyon made more attractive by pines on cliffs that include Sinagua tribe’s troglodyte houses. Their lifestyle is basically presented on a short movie in a little museum.  You can see the ruins from a distance if you follow the Rim Trail that runs along the fault. To see it from closer, make one more effort and take the superb Island Trail, which disappears into the canyon, forming a long loop around a rocky peak.

Petrified Forest National Park is a wide park with many viewpoints. The North side includes the beautiful Painted Desert, which colors of the rocky hills sculpted by erosion turn to red or white according to the incline of sun rays, hence its name. There, you still can find dinosaurs’ skeletons! The Puerco Pueblo, six centuries old Indian village is worth the detour as well. So are the five millenniums old petroglyphs.
In the South side, the picturesque stroll of Blue Mesa will allow you to discover with enchantment the petrified forest itself, one of the widest in the world. It’s an uncommon site which is the result of an extraordinary natural phenomenon : ancient swampy area, torrents carried along many imposing tree trunks there through millenniums. They have been fossilized and turned into quartz with superb and varied colors, consequently to the infiltration of silica. The Crystal Forest Loop will allow you to enjoy all of this magnificence. In Jasper Forest, you will be impressed by Agate bridge, a more than 30 meters trunk under which erosion dug a ravine, making an amazing natural bridge out of it. The Giant Logs path will lead you to Agate House ancient Indian village. Nearby, the Rainbow Forest Museum will fascinate you with its priceless items : stones, fossilized wood, animals specimens, and above all the remains of a  T-Rex skeleton!