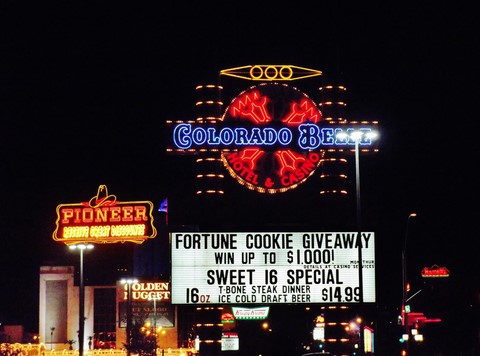 Located in Clark County in the South of Nevada, Laughlin is a small town nicknamed «Little Vegas». Indeed, it gives a foretaste of Las Vegas, without crowd and density of traffic, and with more affordable prices in every area. Gamblers are less wealthy, and consequently placed stakes much lower. Nevertheless, the casino game is the main attraction in Laughlin. Water activities prevail as well: you can fish and swim in the Colorado River and practice among others sailing and water-skiing there. Not far, the Mohave Lake offers the same possibilities to a greater extent. If you are a golf lover, 9 different golf courses are at your disposal.
As we are approaching the town after having crossed the desert in sweltering heat, we wonder in front of that sudden display of light that pierces the curtain of night in the distance. The first thing that catches your eye is the imposing outline of the Colorado Belle Hotel & Casino (photo), replica of a Mississippi paddle boat. As for the Riverside Resort Hotel & Casino, it belongs to Don Laughlin, founder of the city who gave it his name. The complex houses his amazing collection of old cars that the hotel guests can visit for free. There is also a scale model of his first motel in the Colorado River Museum, which deals the theme of fossils and abandoned mines.
Given that Laughlin is located on the borders of California and Arizona, it is a perfect place to stop over when you pass from one of these states to the other. Moreover, the mythical Road 66 is relatively close, more specifically one of its most beautiful portions between the ghost town of Oatman and Kingman in Arizona.
Finally, it is in Grapevine Canyon, in the surroundings of Laughlin, that are located the famous petroglyphs skillfully made by Indians many centuries B.C., and that still remain a mystery: some of them feature men wearing helmets who float in space with stars on the background, which inevitably intrigues scientists. Others play it down, claiming that the portrayed characters wear crowns and not helmets, and that the so-called stars are actually snowflakes, which goes back to the meaning of Nevada in Spanish: “snowy”.

Our return in Vegas was a bit hard: indeed, we were tired of the exhausting Angels Landing Trail in Zion for which we woke up very soon, and also of the long road that followed. The sweltering heat due to the heat-wave in Western America at that time did not help. Nevertheless, we went out until 1:00 A.M., for we wanted to enjoy this city that very pleasantly surprised us in 2013. We started by going to see the famous “Welcome to Fabulous Las Vegas” sign. We had missed it three years sooner whereas it stood close to our hotel, which we ignored then.

The Strip, inevitable area of Las Vegas, has palaces, hotels and grandiose casinos. Each has nightlife (discotheques, bars, lounges, pubs). The rooms are divided into different “playgrounds”. In the first floors are usually the restaurants (world food, fast food or high-end).
We stayed at the Luxor, onyx-colored pyramid that rises more than 106 meters into the sky, and attracts travelers from around the world thanks to its magnificent shapes and extraordinary facilities. The entrance is a huge reproduction of the Giza Sphinx. The Egypt-themed decoration is breathtaking, including obelisks and statues of gods. An elevated-railway connects it to Mandalay Bay and Excalibur. It has restaurants, a night club (the LAX nightclub), a wedding chapel, tables of back-jack and a poker room. On its top, a very large projector lights up the sky every night. You can see it everywhere on the Strip (Las Vegas Boulevard). The IMAX cinema was replaced by an exhibition of objects which stayed on the Titanic. The elevators system is surprising: they climb obliquely along the edges of the pyramid.
The Mandalay Bay is one of the most exotic complexes in the Strip: it carries you to an idyllic Asian tropical decor. Its swimming-pool is sumptuous: surrounded by a sandy beach, a river and waterfalls, it will give you a total change of scenery. And can have fun in the wave swimming-pool if you feel like it.
The Excalibur displays its beautiful turrets with sharp roofs from the Middle-Age that will remind you the Walt Disney's universe. The stage is set: it is aimed primarily at young people and their parents. The Tournament of the Kings is a show on the theme of medieval jousts. The complex also includes an entertainment area.
New York-New York (photo) shows a concentration of the worldwide known Big Apple skyline. Behind the Statue of Liberty rise among others nice replicas of its most emblematic Art Deco skyscrapers: the Empire State Building and the Chrysler Building. The whole is crossed by an amazing roller-coaster, much appreciated by thrill seekers. The interior decoration is simpler: the reconstitution of red brick façades, cobbled streets with their manholes.
The MGM Grand is one of the most imposing complexes in Las Vegas. It is 89 meters high and has 30 floors. It has a large Casino, a resort, i.e. all activities available around the hotel: there is a wedding chapel, two spas, a gym, tennis courts, a park of greenery with several swimming pools, a large convention center and an auditorium. Besides, several attractions are proposed, as a habitat for lions (symbol of MGM films), a show from the Cirque du Soleil, many concerts and major sporting events in arena theaters.
The City Center is an archipelago of artificial island shaped like a planisphere in the middle of a reconstitution of the Persian Gulf. It has a big shopping mall, various hotels including the Aria which houses a casino and a theater where the Cirque du Soleil, and finally a museum: The Fine Art Collection which houses mainly paintings and sculptures.
The Paris-Las Vegas is one of the most prestigious hotel-casinos in the Strip. There are replicas of the Eiffel Tower (on its summit stands a gourmet restaurant), the Arc de Triomphe, the Palais Garnier and the Tuileries Fountain. The inside reconstitutes the alleys seen in Jean Renoir's movies. On the ceiling, a fresco depicting a pale blue sky with white clouds gives us the impression of walking outdoors.
The Bellagio is a luxury hotel in an Italian style architecture taken from the Lombard villas in ochre and pastel colors. It has its own Lake. Every day takes place a free show: a water ballet with jets from the fountains on an entrancing musical tune. A large Botanical Garden is located inside. 2000 blown glass flowers hang on the ceiling of the lobby. It houses a large casino, great restaurants, a chocolate fountain from the pastry chef Jean-Philippe, and an art gallery.
The Ceasar's Palace is the first thematic hotel in the Strip. Its wide Roman columns, its marble decorations, its gilding and its red carpets are where its attraction lies. Walls are covered with Roman antiquity-themed frescoes. It contains a few luxury shops. Free "son et lumière" shows are offered.
The Flamingo is one of the oldest hotel-casinos in the Strip. Its emblematic façade with a flamingo from Florida is well known all over the world. Its swimming-pool is in the heart of a reconstituted landscape with rivers, waterfalls and planted with palm-trees. It has something very exotic, the same as its annex, the Margaritaville, which has been its extension since 2011.
The Imperial Palace complex has a beautiful collection of 250 period cars, some of which belonged to celebrities.
Somewhere between an amusement park and a palace, the Mirage was in its time a really innovative project. The Volcano & Mirage show that takes place every night is worth seeing. It houses a very lush atrium made of palm-trees and various exotic plants.
The Venetian is a hotel-casino that takes up the theme of Venice. It has been including a huge extension for a few years: The Palazzo. It contains 16 restaurants, a night club (TAO nightclub), several pools, and a spa. It also contains the Madame Tussauds, celebrities’ wax museum, the Guggenheim Museum of Las Vegas, and the Sands Expo and Convention Center, located just behind the hotel. Like the Paris-Las Vegas, a fresco on the ceiling depicts a pale blue sky with white clouds. Finally, a network of canals allows you to sail aboard gondolas along the Grand Canal Shoppes, the Venetian shopping mall.
The twin towers of the Wynn-Encore stand out of a hill covered with pine trees. It includes several waterfalls where free "son et lumière" shows are offered. Corridors and atriums are richly decorated with trees and flowers.
The Stratosphere Tower is a 350 meters high tower which houses a hotel, a casino and various attractions.

Downtown, nicknamed the Glitter Gulch, is the only place in Las Vegas that really has a soul. Its casinos and signs are from another age. Fremont Street Experience vault lights up every hour of the evening for a spectacular "son et lumière" show. The Fremont East District is the part dedicated to non-gamblers. El Cortez is one of the oldest hotels-casinos in Las Vegas. Its façade looks like a Mexican hacienda.

The Art District is the area of antique dealers and art galleries (the Arts Factory). There are large murals. Every first Friday of the month, large barbecues are offered with about fifty artists who come to exhibit and comment on their works.

East Las Vegas covers a very wide area, which biggest part is occupied by Paradise. The famous Hard Rock Hotel with its guitar is the main attraction. The population is young thanks to the University. The Paradise Fruit Loop is the gay and lesbian district. East Las Vegas also includes the Las Vegas Convention Center and Mc Carran International Airport.

West Las Vegas is a patchwork of eclectic atmospheres. Mainly locals go to casinos. Chinatown is easily located thanks to its typical roofs. Springs Preserve is a place of playful discovery and awareness of preservation of nature and environment. There is an example of modern home using recycled materials. Performances are put on in an amphitheater with a seating capacity of 2000.