San Francisco, «the city by the Bay»
You can click on pictures to enlarge them

Free, open-minded, tolerant, vibrant, creative, ecological... There is no lack of adjectives to praise that town with a diversity all the more remarkable that it is a human-sized city. It is hard not to be appealed by its numerous assets and the famous bay where it was established. The whole is a harmonious setting that is very photogenic and particularly different. Headquarters of the Gold Rush, melting-pot of numerous artistic trends characterized by a forward-looking counterculture, it has always managed to renew itself while maintaining its pioneer spirit. A wind of freedom and joy of living is permanently blowing there.
Built on some forty hills, we do not hesitate to pace up and down its steepest streets, for we know that no matter what the direction we take, we will have quickly a bird's eye view of one of its sites or monuments known throughout the world: the very colored Painted Ladies, the iconic cable-cars, the beautiful and winding Lombard Street, the former Alcatraz penitentiary perched on an island in the middle of the bay... and above all the must-see Golden Gate Bridge, that the mist from the Pacific Ocean comes and drape with its thick whiteness in the late afternoon, before it lifts in the middle of the morning after. The phenomenon occurs with a sometimes disconcerting punctuality. But it is so strikingly beautiful that it is rather seen as a local ritual and a spectacle we would not miss for anything than as a vagary of the weather. 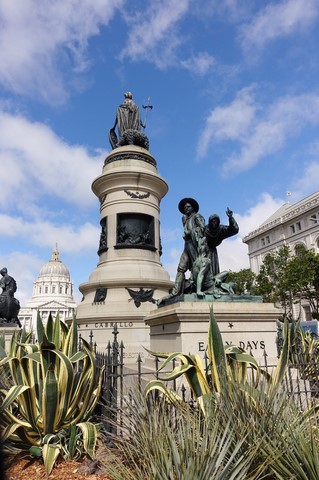 It is the Historic Center, in the middle of which Union Square offers department stores and luxury shops, exhibitions, show dances and concerts. Close by is the French District.
A stone's throw away from there, the beautiful and colored Dragon Gate, covered with green tiles, welcomes you to the picturesque Chinatown. Very exotic, it is the first Chinese district in America, moreover the nicest and surely the biggest, even though New-Yorkers also claim that title for their own Chinatown. In the small Ross Alley stands the Golden Gate Fortune Cookie shop, where are made those famous cookies that contain a message. Its typical decor carries you away to another continent and to another time. So it is difficult not to linger there.
Civic Center (photo) groups together the various administrations, among others the City Hall, Fine-Arts style building which reminds inevitably the famous Capitol in Washington. Theater District is - as the name suggests - dedicated to art. It enjoys picturesque rooms, and others that are more modest but are nevertheless worth visiting.
Financial District is naturally very vivid by day before it clears in the late afternoon. The only attraction is the Transamerica Pyramid, designed to withstand tectonic movements, and which sharp outline proudly overlooks the city skyline.
As for Tenderloin, it is unfortunately quite rightly known for being disreputable, especially at night. Homeless are numerous. It is all the more regrettable that it abounds in high quality bars and restaurants. 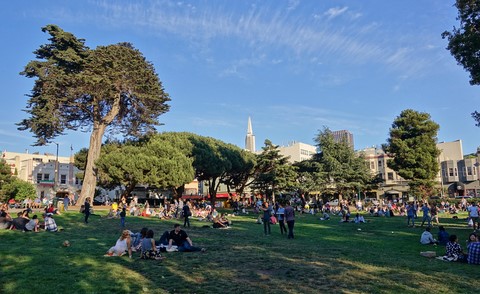 The numerous piers in the bay along the Embarcadero are an integral part of the identity of the city. Overlooked by the superb Ferry Building and its blue spire with a clock, they contributed to its development. The very impressive Bay Bridge - the other suspension bridge of San Francisco - stretches over more than 13 kilometers to join Oakland. The place is very pleasant, and we feel immediately an indefinable sense of well-being there. We fell in love with the city from the moment we came to that area. The long promenade, the covered market (Market Place), the farmers market and its high-quality restaurants draws cheerful crowds of people who take the time to live. Others practice biking, footing or roller while enjoying a privileged view of the bay. Some street performances also take place there. All of that happens in contagious good mood. The most touristy part is the must-see Fisherman's Wharf, especially Pier 39: seals, eared seals and sea lions do the show for young and old alike in front of the Alcatraz former highly secured penitentiary isolated on its island with steep cliffs, and with the Golden Gate Bridge on the background. Totally different, Hyde Street Pier and its beautiful period ships fill you with wonder.
Not far stands North Beach: known nowadays as the Italian district, it was some decades ago the birthplace of the Beat Generation, famous movement of counterculture which creators are among others Jack Kerouac, Lawrence Ferlinghetti, Allen Ginsberg, Neal Cassady... In the surrounding of Washington Square (photo) rises Saints Peter and Paul Church.
The whole is overlooked by Telegraph Hill, hill with very steep streets on top of which the Coit Tower - remarkable Art Deco building - seems to go on guard in all its majesty. Its top offers an unrestricted view of the city and the bay. From its base, the Filber Steps rush into a narrow jungle with splendid hanging gardens. In their setting appear charming small colored houses. Rhododendrons, bougainvillea, jasmine, fuchsias and roses exhale their heady scent. You can sometimes hear some wild parrots perched on trees. Those steps on the hillside will lead you to the Embarcadero, after they carried you away for a while to one of the most exotic places in San Francisco. 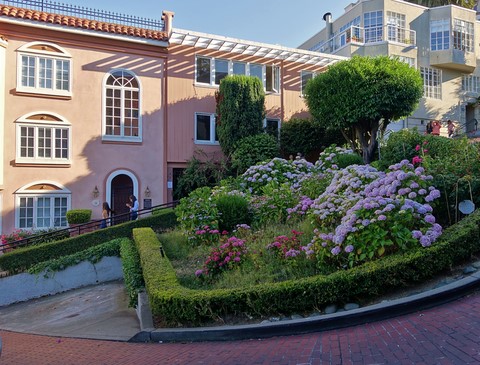 Nob Hill and Russian Hill are very steep as well. That is the reason why those districts are at the origin of the creation of the cable-car and its unique in the world mechanism in the late 19th century, which stood out as a necessity. The passage of those vehicles constantly overcrowded is part of the local folklore and arouses fervor and wonder for the closest passers-by. The view of the city and the bay is spectacular.
The architecture there is rich and refined. Beautiful villas rise, as well as palaces and luxury hotels. The most remarkable buildings are Grace Cathedral and the Masonic Temple. However, the main attraction is the worldwide known Lombard Street (photo). Winding and sloping, its bends rush into fresh armfuls of hydrangeas, the whole in front of nice colored town houses. The bird’s eye view of the bay is vertiginous. 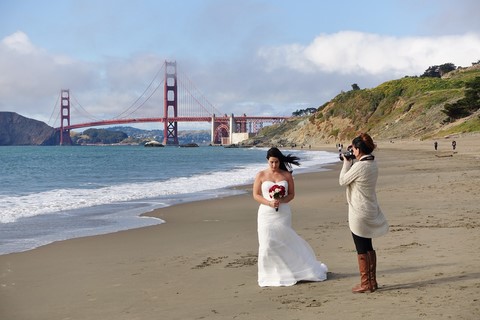 Even though it does not bear the comparison with Chinatown, Japantown houses the most numerous and the oldest Japanese community in the country. It abounds in places of worship, typical shops and restaurants. Tinged with an old-fashioned charm, it is very pleasant for its tranquility. The area only livens up for the two Cherry Blossom Festival weekends, which ends in the blaze of glory with the Grand Parade and its picturesque floats.
Pacific Heights has two undeniable assets: an unrestricted view of the bay, and sumptuous colored Victorian houses with remarkable architectural diversity and richness. One of them, the Haas-Lilienthal House, is open to visitors.
The old red brick buildings of the Presidio are near to the Greco-Roman Palace with its superb columns that houses the Palace of Fine Arts. With military tradition for nearby two centuries, it is now a very pleasant visit place ideally located on the bay side, where impressive trees seem to have bent under the repeated assaults of the wind without giving away. And above it all, we can admire from there the famous Golden Gate Bridge (photo) that displays its slender outlines, which coral color contrasts beautifully with the deep blue of the water. Then, it will be very difficult for you to resist the temptation to drive, bike or walk on that real Art Deco masterpiece built in the 1930's. Whatever the mean of transport you choose, the sensation you will feel will be indescribable. Be aware that there is a fee only in the North-South direction (from Sausalito to San Francisco) and that you have a time limit to pay on the Internet if you did not do it directly. 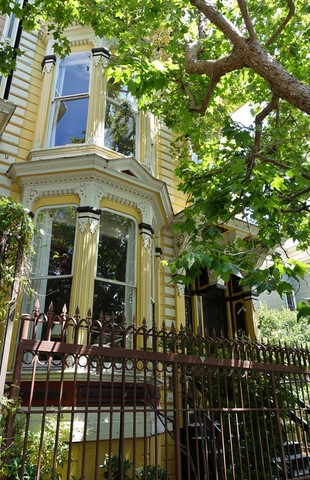 Hayes Valley (photo) is highly prized for shopping. Its sumptuous colored multistoried Victorian houses in Queen Anne style are the equal of those in Haight-Ashbury district, nearby. The latter is known for being the birthplace of the famous Summer of love. Generally, many movements of counterculture were born there. It kept undeniable sweetness of living and carefree life. Restaurants and shops there have a special character. Parks are very pleasant, notably Alamo Square in front of the very famous Painted Ladies, those seven Victorian houses with different colors in a row which are one of the idealized images of San Francisco. Unfortunately, it was under construction during our stay and we could not have access there.
The superb and huge Golden Gate Park is often compared to Central Park in New-York. It offers many activities: biking, horse riding, polo, golf, tennis, skating… The arboretum and the Conservatory of Flowers are beautiful, as well as the Japanese Tea Garden and its very nice pagoda. Stow Lake extends in a superb green setting. It is a haven of peace where you can rent boats and row casually among ducks, herons, turtles and many others while passing under splendid bridges. The very colored Japanese kiosk, with a very refined architecture, is beautiful. Nearby stands a waterfall around which some hummingbirds come to gather on flowers. You will also meet squirrels, chipmunks, and raccoons if you are lucky. Finally, a Dutch windmill stands in the western part of the park, close to the seashore. 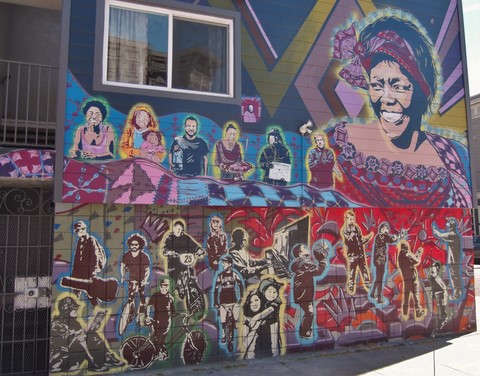 On our very first days, we stayed in the SoMa (South of Market) district, which known years ago a real renewal, notably with the establishment of museums. It was then very fashionable, with its trendy restaurants and its very appreciated night-clubs, but it starts now to lose ground to the benefit of other districts. From now on, it only gets really crowded during baseball games in the famous AT&T Park.
Castro is the gay district. It is very charming and pleasant.  Its Victorian houses, more modest than the ones in Pacific Heights, are nevertheless splendid. There is often a mad rush on to have a taste of its bustling nightlife.
As for Mission (photo), it is the lesbian district. It owes its name to the San Francisco d'Assis Mission - oldest building in town - built on the late 18th century. It is really appreciated by artists and bohemian youth. It has traditionally a Latin identity, even though the latter has declined a little bit over the years. Dolores Park, the green lung of the district, is very pleasant and people like to come there and have a good time, especially on weekends. Finally, Mission is less showy than Castro.
More west, the Twin Peaks, two hills that rise at the edge of town, offer a breathtaking view of San Francisco and its bay.