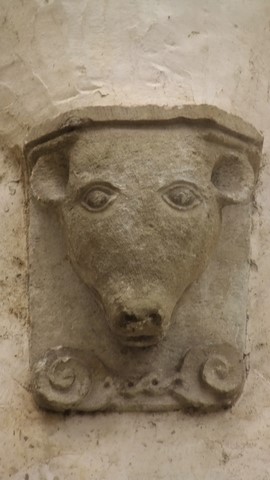 In 2010 in Slovenia, we visited Škofja Loka under a thundery shower. We left Maribor in the end of the morning to go for a drive to Rédics, pleasant little village in Hungary. Then, we drove across the country from East to West headed for Bled, picturesque village in the Julian Alps.
We had this trip under thunderstorms for the most part and it lasted all day. So we decided to brave the storm raging furiously to visit this beautiful medieval village. And what was supposed to be a nightmare of a moment turned out to be against all odds a real part of fun.
It is hard to say what caused great hilarity in the pouring rain. It was mostly a series of details that seemed very funny. Perhaps because we had a garish look about us : me with brown shorts, a navy blue windbreaker with white surf style pictures and boat shoes, J.R. with shorts, a gray, red and black windbreaker over his backpack which made it look like a human dromedary. Maybe that calf's head engraved in stone that also defied all imaginable bad weather conditions through centuries: it surprised us at the corner of a street, and seemed to stare us with a bored look (photo).
We will spare you the other details, because they are only funny while you are living them at the time. Listing them would be pointless and devoid of humor. But you surely all knew one day or another that sort of great hilarity for nothing, or for a set of small things.
The locals who saw us from the window of their home or the cozy interior of a bar or a restaurant were hilarious while looking at us, both because of the way we looked and our apparently infectious bursts of laughter. We became in a few minutes the village attraction in spite of ourselves. It was difficult not to see us: there were just two fools to go out in the street in that weather: us.
The moral of this story is that you do not have necessarily to be discouraged when bad weather comes to spoil a visit, because a nice surprise can wait for the chance to trip you up. 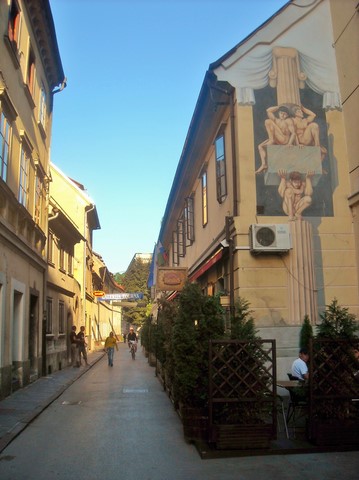 During our stay in late September 2018, we dedicated a whole day to the North-East of the country, beginning with Velika Planina, to continue with Bled. On the road between those two extraordinary sites, we stopped to go shopping in a Hofer supermarket. We bought something to eat on the run. We also bought a 5 liters big bottle of water to keep in the trunk of the car and use it to refill the small bottles we take in our back-bags. Once we arrived in Bled, we were getting ready to start the walk around the lake and the hike to the panoramic viewpoint offering a breathtaking bird’s eye view on the site. For the first time after four visits of Bled, the sun was out and it was even rather warm. I told myself that filling each one of our small bottles would not be a luxury. So, I opened the trunk of the car to take the big bottle and open it. An aggressive acidic smell immediately assaulted my nostrils. Then, it was obvious to me: we managed to buy a 5 liters big bottle of… white alcohol vinegar!..

We dedicated the day after to the South of the country. We went back to Ljubljana at night to eat at the Foculus pizzeria, located in a small alley of the left bank of the Ljubljanica River that opens onto a nice view of the castle (photo). It is located in an old Baroque style building with stone vaults inside. The decoration is really impressive. We ate very well, the music was good and the atmosphere was very young. We spent an excellent night there. However, we prefer the delicious pizzas of the Ljubjanski Dvor restaurant that we discovered on the first evening of our first trip to Slovenia in 2010, and that seem to be unbeatable. Besides, we go back there at least once during every stay.
Before we leave, J.R. went to the restroom, and there he attended a surreal scene. The men’s room includes a urinal, a washbasin and a room with a toilet pan. JR. used the urinal. A man came in just after him, followed a few moments later by a woman who stormed in like a fury, without caring about ending up in the men’s room. They had an argument in front of J.R., totally ignoring his presence. The women finally left. So, the man locked himself in the room to do what he had to do. Then, the women came back, still in a rage. She knocked nervously on the door yelling at him. The men opened the door and appeared to her with its trousers down, and so showing its private parts. He seemed not embarrassed at all by that situation, behaving as if he was at home and not in public restroom. They began again to argue, still ignoring the presence of J.R., completely dazed to attend that hell going on whereas he was still peeing. Finally, the woman left again… to come back and knock the door one more time. And once again, the man opened and appeared to her showing his private parts. And they started again to bawl at each other like hysterical persons, offering J.R. a replay of that memorable scene.