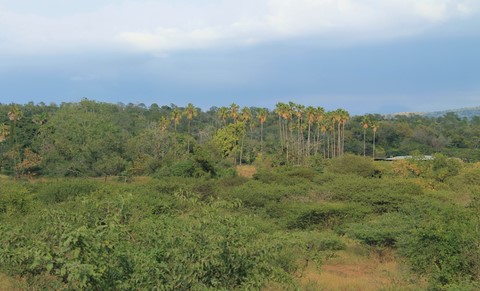 During our outbound flight between Paris and Johannesburg, we were installed in the four-seat central row in an Airbus A380. J.R. was sitting on the left aisle seat and I was by his side. Then, a young couple came to sit on the same row, the young man on the right aisle seat and the young woman next to me. They were having that trip to celebrate their first wedding anniversary. As a result, it gave them a good fund of sympathy with the air hostesses who often came to talk with them.
It was a night flight, and we all ended up falling asleep. One or two hours later, I woke up and I felt a touch on my right shoulder and my right arm. I had an idea of what was going on, but I took off my mask anyway to see it with my own eyes: as I thought, the young woman snuggled up to me in her sleep. Well, it was kind of pleasant. She was not a striking-looking woman, but she had charm. She woke up just after me. Then, she realized the situation and she sat up straight. But a few minutes later, she fell asleep again on my shoulder. She did it many times. She chose the wrong side every time! The air hostesses must have not believed their eyes as they saw that! It was flattering for me, but I also felt embarrassed to her husband. I could not imagine telling him in the early morning: «man, she got on the plane with you but she will get off with me!»

We spent our first night in a motel in Pongola (photo), in the state of KwaZulu Natal, just under Swaziland. There, we met Georgie, their facetious parrot from Gabon. The staff told us a long time about its «feats». He was able to imitate many voices and many noises perfectly, like the whistle of a man who is looking at a fine girl passing by. Every member of the female sex who passed in his field of vision was in for it. He also imitated the «beep» of construction vehicles driving backwards. During some important works, he regularly pulled that stunt to workers, who looked all around them thinking one was really coming. But Georgie did not content himself with that: he even went so far as miming the construction manager’s voice, making a mess while giving inappropriate instructions, so much so that they had problems of expiration of deadlines! 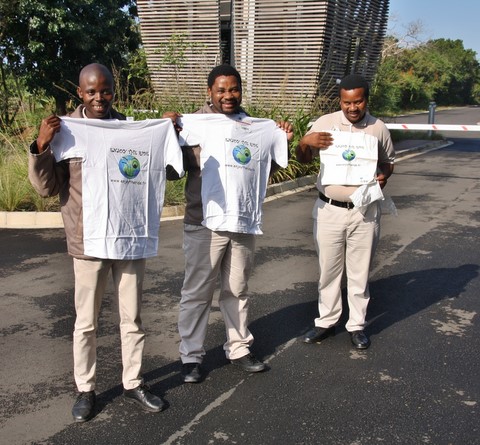 During our visit of iSimangaliso Wetland Park, also in the state of KwaZulu Natal, we sympathized with three members of the reserve staff. One of them told us he loved our «Enjoy the ride» t-shirts and asked us where he could get one. We explained to him that they were by-products from our website, specifying him that we do not sell them, but give them to some persons we meet during our trips. The condition is that they accept to pose with the product concerned to be photographed. The picture will be published on our website and our Facebook page for our promotion. He accepted willingly, so I gave him one, explaining him that we only had M size left. He answered me it was perfect. Indeed, he was rather slim. Then, he called his two colleagues, who came with happiness telling us they wanted one to. I repeated we only had M size. One of them answered me there was no problem, except that he was a little bit potbellied. I was not convinced but I gave it to him anyway, telling myself he would offer it to one of his children or to another member of his family. When the third one – even more potbellied – told me it was good for him too, I was more than doubtful. Anyway, we had no t-shirt left so it was done. I gave him an «Enjoy the ride» beach bag instead, and he was completely fine with it. He was as satisfied as his colleagues. So, the three of them posed for the picture, proudly showing their little present (photo). We talked with them for a while, we had fun laughing together, and then we said goodbye to them before we get back on the road to visit that extraordinary reserve.
The very evening, J.R. told it to a friend of him settled in Cape Town, with whom he communicated almost each day of the trip. We had planned to meet her in her adopted city at the end of the journey. She explained to him that we had unknowingly done a nice gesture: indeed, many employees in parks and reserves are poor; some of them even live in townships, which we ignored. So, that was a beautiful present in addition to a very pleasant shared moment. 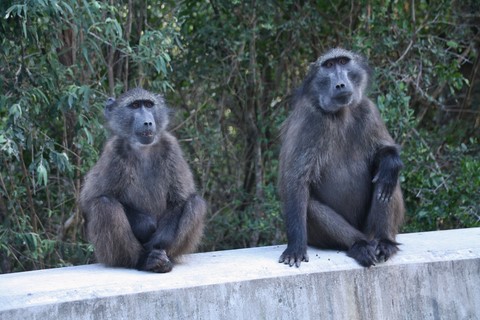 Along the Garden Route, in the state of Western Cape, we made a stop in Nature’s Valley. Just before we arrive, we found ourselves in front of a rumpus of baboons in the middle of the road. All of them rushed towards the shoulder, except the most imposing who was staring at us insistently, stopping us from going further. Then, we understood that we had to bide our time, above all not to force our way. So we decided to observe and photograph them while waiting. One of them was right by us, perched on a crash barrier, in a totally casual position, scratching… you know what… He made us laugh so much, so we took a picture of him. When they saw that, three other baboons showed up to climb on the crash barrier too and settle comfortably, posing just in front of us. Their insistent and imperious stares seemed to tell us: «we want to be on the picture, too! There is no reason why we are not!» It was really hilarious! So, we honored their request. Then, J.R. managed to photograph a female in a sitting position who was holding her baby in her arms. It was very touching! In the end, we saw one of them searching parasites in the dorsal hair of another to remove them. Their attitude, their positions and their facial expressions were so close to the humans’ ones that it was disturbing. Finally, the rumpus leader let us pass and we were able to carry on further, both amused and enchanted by that unexpected moment in their company.