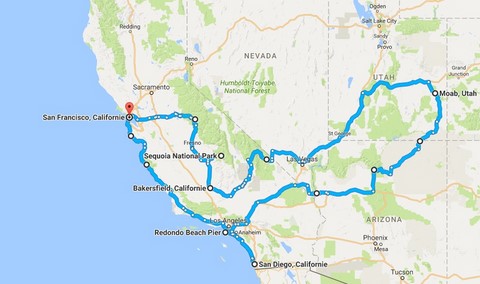 In May and June 2016, we went back to the U.S.A. with a lot of happiness, for three weeks this time. After our unforgettable trip in June 2013, we had planned to return there in 2015. Unfortunately, the friend who came with us couldn't afford it at that time. So we decided to make a gesture of friendship and solidarity postponing this new travel one year later. We started the adventure as three, so it seemed unthinkable to us not to continue it as three.
Once again, it was worth waiting. This new journey was memorable. We started with the fabulous San Francisco, which was a discovery, and for which we felt love at first sight. We drove down along the coast to San Diego, making many stops in wild landscapes with a breathtaking beauty, or in sometimes amazing towns where we mingled to the locals, touched once again by their refreshing sympathy, their very enjoyable helpfulness and their unwavering enthusiasm.
Then, like we did in 2013, we went inland to completely different landscapes made of lakes, rivers and mountains, and arid or semi-arid areas cut off from the world. We returned to firm favorites as Grand Canyon, Monument Valley or Arches National Park. Others were discoveries, like Zion, the mythic Death Valley and its unforgettable lunar landscapes, and finally Sequoia National Park and Yosemite. These two last mentioned impressed us, notably with their giant conifers close to which we felt very small. We had already felt the same one year before in Brazil, visiting parks or landscapes with very impressive trees from different species. More generally, those magnificent and outsized landscapes explain mostly the fascination we feel for the New Continent, land of vastness, exploration and adventure. Losing ourselves into that great wide open is a unique experience, quite simply because it allows us to keep this precious and essential capacity to marvel.
Though we learned the lesson from our first American trip according to long distances, we made some misjudgments. We had to shorten some stops, and even to give up some others. Fortunately it's been rare. However, we tell ourselves philosophically that it's always nice to be caught unaware. We keep an optimistic eye on the future thinking of our next trips to the U.S.A., and realize with happiness that this country made of vastness will always surprise us, even after many stays.
We felt many times the great joy to return to places visited in 2013, with a very strong nostalgia. We think first and foremost about Redondo Beach, small seaside resort in the southern suburbs of the sprawling Los Angeles. Indeed, this is where we started our trip in 2013, thus realizing our dream to visit that extraordinary country. This is why it matters so much to us: it will be forever the first, our anchor point in California, even in the U.S.A. generally. We will always carry it in our hearts. We think of Flagstaff as well, with the hot memory of that unforgettable and unexpected night we had in June 2013 in that very typical small town in Arizona. We definitely adopted it as one of our favorite cities. It would have been a pity not to go back to unavoidable national parks as Grand Canyon and Monument Valley. We even lingered there more than in 2013, having the luxury of admiring them at sunrise and at sunset. According to Grand Canyon, the main event was its over flight in helicopter, my wonderful birthday present a few days early. It was a surprise from my mother, J.R. and our friend. The three of us took a flight for an unforgettable experience, a breathtaking spectacle.
This trip was also the one of first times. We made hikes that were rather long and physical, among others Devils Garden Trail (Arches National Park, Utah), Vernal Fall & Nevada Fall (Yosemite, California), and moreover dangerous like Angels Landing Trail (Zion, Utah), with the end of the hike on the crest of a mountain more than 400 meters high, the space on each side. Inadvisable for persons who have problems of dizziness!.. We also visited for the first time American campuses. We had been dreaming about it for a long time, for the numerous movies and TV series taking place there tempted us. We started with the small University of San Francisco, and saved for the end of our trip the prestigious University of Berkeley. We also strolled in the streets of a ghost town cut off from the world, in this case Calico in California, permeated with a silence so deep that it was quite absorbing. Finally, a lucky meeting made our day as we arrived in Moab: indeed, we crossed Miss Utah and said «Hello!» to each other.
And how could we conclude without praising once again American girls and their very enjoyable spontaneity? We think notably about their tendency to favor us with a smile, sometimes accompanied by a «Hi!» or a «Hello!» when we like them just fine and take a look at them. This sincerity is quite pleasant and refreshing. No pretences at all: no fake attitude, nor feigned coldness. They make us understand that they feel flattered and this reaction is a kind of appreciation. For this reason and many others, we love them more every time.
As this new trip has just came to its end, with its attendant hot memories and intoxicating images which are not at all affected by the unavoidable blues of the way back, we wonder which one was the most memorable. The one in 2013 was the discovery, and the realization of a dream. According to everything, the first time always leaves its mark on you forever. This year's trip was the continuation of this dream, so big that it's impossible to realize it in just one time. And we reach the conclusion that we don't want to choose, but rather to take to grips with both of them, to keep them deep inside of us for life.
Sometimes, loving things is not comparing them anymore.