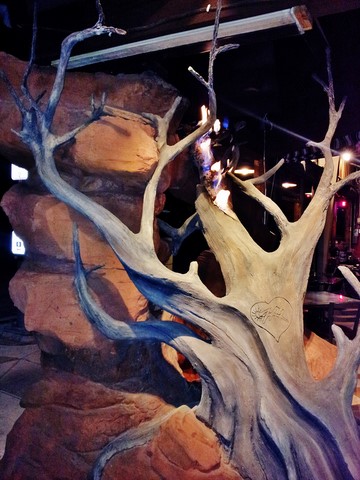 It is a typical small town, young and dynamic. The city centre is very nice. We chose to stay there to resume the visit of Arches National Park we started three years ago. To join it from Monument Valley, we stopped at Mexican Hat, amazing rock with the shape of a Mexican hat, as the name suggests. It also gave its name to a whole village in the middle of nowhere.
Beyond the proximity to many remarkable sites which make it a conveniently located stopping-off point, Moab has much to offer for a short stay: its streets are very welcoming, its restaurants and cafés are nice and its souvenir shops are amazing and funny. Sports shops are not forgotten: indeed, there is a long-standing tradition in Moab for mountain biking and rafting. Besides, you feel its inhabitants are very close to nature.
At the supermarket, the choice at the food section is considerable. You can compose your own salad, as well fruits as vegetables: numerous stalls to the fresh food department are at your disposal and you fill your carton as you like.
Like we did in 2013, we ate at the restaurant Zak Pizza (photo) on Main Street. Dishes are high-quality, notably wood-fired pizzas, red meat and desserts. The decoration is really nice.
For all these reasons, we greatly recommend a stop at Moab to those who wish to visit the national parks of Utah.
And the cherry on the cake... we had the chance and the privilege to meet Miss Utah and say hello to her! She was walking along Main Street with her two bodyguards for short courtesy visits in shops, bars and restaurants. 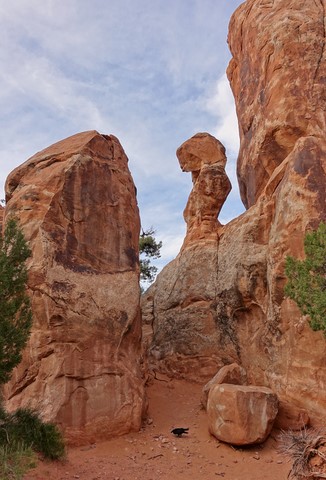 It is a small surprising park which groups together the largest concentration of natural arches in the world, molded in magnificent red sandstone, of all sizes. Some exceed eighty meters range. A tarred road about 23 miles long runs across the Park from North to South. Most of these arches are easily accessible by car or after a 15 minutes walk. The most famous are Landscape Arch, a 90 meters long rock strip over a sandstone amphitheater, Double Arch, and Delicate Arch, which became the idealized image of Utah that appears on license plates of the state. There are also other amazing rocks: suspended rocks (like Balanced Rock), fairies chimneys, and vertiginous red cliffs.
This year, we visited a different place in the park, located in the North. We made the Devil’s Garden Trail (photo), a hike classified as hard. 11.5 kilometers long, it groups together eight arches, notably Landscape Arch, one of the biggest in the world, which is however surprising in the thinness of its outline. It is dangerous and prohibited to get close to it because of falling rocks.
Double O Arch is very singular: it looks like a huge «8» carved in red stone. The landscapes you walk through are fantastic, but you got to earn them. Some parts are rather hard, sometimes vertiginous. The heat may be an additional difficulty. Usual precautions during desert areas crossings apply naturally. Don't hesitate to provide yourselves with a map (available at the starting-point of the trail) not to get lost. In any case, follow strictly cairns, those small mounds of stone easily recognizable.
Near the end of the trail, our friend saw a rattlesnake, which reminds us we also have to be careful with that. Fortunately, they are rare and they only attack when they are really assaulted.
After so many efforts, we had a picnic while admiring a beautiful sunset. And then we went for the same hike on the way back, under a deep night sky filled with stars, provided with our flashlights. That trail was spectacular and memorable. 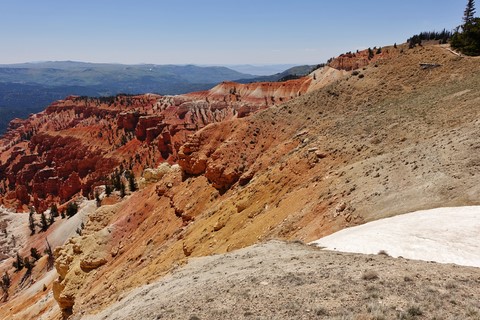 Like Red Canyon, that modest park is nicknamed «Little Bryce» because of its similarity with Bryce Canyon. Indeed, it is a natural amphitheater with red, orange and ochre colors made of hoodoos. Fir trees bring some greenery that contrasts perfectly with the warm tints of the rock formations, to which some Bristlecone pines - known for their longevity and their resistance - cling firmly. A nearly 8 kilometers scenic road run along the cliffs and offers beautiful viewpoints. Located more than 3000 meters high in the heart of the Dixie National Forest, we found there a bit of coolness on the road from Moab to Hurricane, overcome by the heat. There were even remains of snow, which gave the place a captivating beauty. 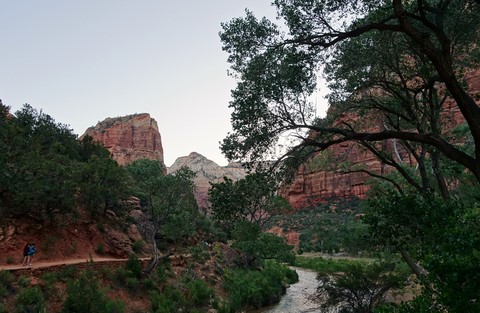