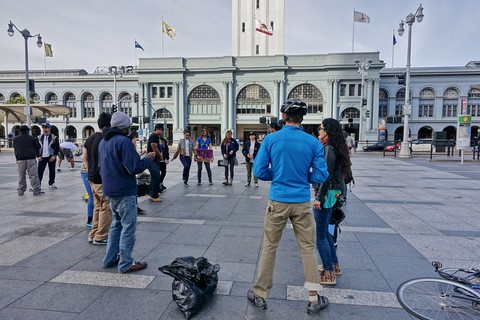 We created a brand new by-product on the occasion of our return to the U.S.A.: a streamer with our logo and the address of our website that we bring wherever we go. We ask people we meet on the way and with whom we sympathize to write a little note on it with a permanent marker, accompanied by the date, the place and their signature. That promotes our website, and allows us to create links and to keep memories of those short-lived but always striking meetings.
The first to sign it was a girl we met on our first unforgettable day in San Francisco: we attended in front of the Ferry Building (photo) a great show dance improvised by a very cosmopolitan band of young people to support Bernie Sanders' candidature. Indeed, our trip went in the context of Democratic nomination Hilary Clinton and Bernie Sanders were running for. San Francisco was clearly devoted to the latter - witness the numerous posters or stickers on private individuals' houses or vehicles we could see during our stay. The Americans are intrinsically honest and used to take responsibility for their choices and to show them, on a sometimes ostentatious way that might shock us as Europeans, but they certainly make it clear.
So we sympathized with one of the girls in that young band. She told us about her ideals and their support movement for Bernie Sanders. We told her about our passion for travel, our love for the U.S.A. and our website. She gave each one of us a badge supporting the candidate that we immediately pinned to our back-bags. We kept them with us during our trip... until we heard about Hilary Clinton's victory on June, 8th in the morning as we were in the charming small town of Sonora, California.
In any case, she will be forever the first to drop her name and her signature accompanied by a little note on our streamer that unforgettable day. And San Francisco will be forever the first town where it did happen.
It could hardly have turned out better. 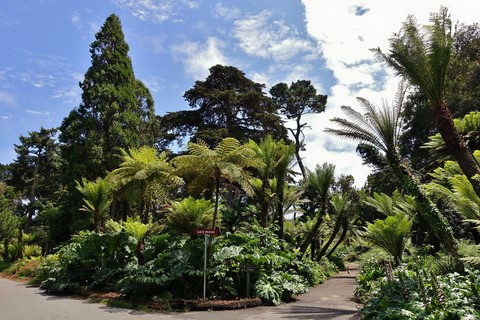 During that trip, the three of us were equipped with walkie-talkies. Those were indeed very useful to meet again whenever we would separate from each other for a while. We were not new to that game: indeed, J.R. and I had already tested them out in 2015 in Belgium and in Brazil. We definitively adopted them, because we find them as playful as useful.
The second day of our trip, we were in Golden Gate Park in San Francisco (photo). I was with our friend nicknamed Speedy, whereas J.R. had walked away from us. We met a young mom with her children. She came to ask us if we knew where the playground was. Given that the park is vast, she was a little bit lost. So, each one of us pulled out a different map of the city, but neither of the two was precise enough. Then, I called J.R. on the walkie-talkie. Actually, I thought he was rather far from us, but he was just relieving himself in the shrubs nearby. So he almost startled us as he appeared suddenly from the vegetation and pulled out its Cartoville guidebook. It is a very useful small hardcover book: it folds out into maps of different districts of a city or a region. It is precise and detailed. Thus, he was able to inform the young mom. She was caught between gratitude and surprise. She seemed to wonder where we came from, but above it all she might have thought we were at our peak: no soon one of us calls another one than he appears the next second from the bushes with its guidebook in his hand, and with twigs still stuck in his hair and on his clothes… always engaged, ready to pounce to help others!..

On our last day in San Francisco, we had diner in a restaurant in the Fisherman’s Wharf district, close to which stood our hotel. Just before we arrive, we met a young girl on a bike who seemed to be lost. She asked us for help because it was a rental bike, but she could not find the rental station to return it. She got all the more stressed that closing time was drawing near. Moreover, she had lost her friends. So we pulled out a much detailed map of the district offered by our hotel. Thus we realized that various rental stations - which name I forgot - stood in the surroundings. That made it easier for us. It remained to be seen which ones were still open.
Then, without wasting time, we dispersed, naturally equipped with our walkie-talkies: J.R. went one way, I went the other way, and Speedy stayed with her. She was stunned: she saw J.R. and I running around, disappearing into one street to appear from another one. She did not know which way to turn. She heard in Speedy’s walkie-talkie the various messages we sent to one another. Even though she surely did not understand them, she realized we were deeply involved in our mercy mission. Every time we found ourselves in front of a closed rental station, a sign indicated us the nearest one that was still open with the precise address. A courteous and efficient service!..
Finally, Speedy called us to warn us that the operation «rescue of the damsel in distress on her bike» was canceled: indeed, her friends had just found her. They led her to the rental station that was still open.
She thanked us at least ten times. Like the young mom in Golden Gate Park, she was caught between gratitude and amazement. It would be extraordinary if they knew each other, and that they come to incidentally talk about us, wondering who the hell were those three French boy scouts who briefly came into their lives, those good Samaritans gentlemen who cross the world to help American girls in distress, equipped with all kinds of maps and with their walkie-talkies they keep on them at all times.
After all, it could be. Let us keep in mind that San Francisco is a human-sized city.