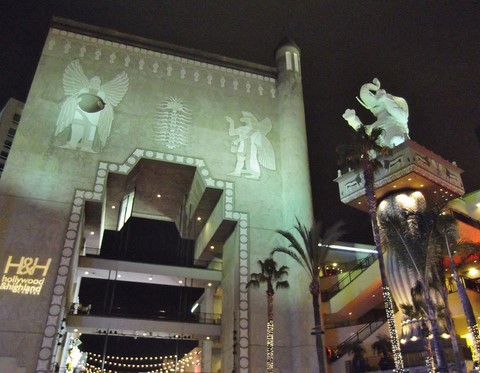 During our memorable evening in Hollywood Boulevard, we thought we would just make a short stop to stroll a few minutes on the must-see Walk of Fame. But we were swept along by the crazy atmosphere that reigned there, and we finally decided to stay for a few hours.
We started with affixing one of our «Enjoy the ride» stickers on a street lamp in order to promote our website, and then we took a picture of it with a few stars on the sidewalk in the background. That is when J.R. noticed that empty star among the other ones, and he had the crazy idea to stick a large size sticker on. We only had four for the whole journey: that one, the second we stuck later on an old Trabant in Bryce Canyon, the third in front of the Luxor in Las Vegas, and the last one at Lincoln Park in Chicago.
A few minutes later, we saw a group of young Asian tourists photographing each star. When they saw the one with our sticker on, they were flabbergasted and hesitant. Then we told them: «go ahead, don't hesitate! This one is very famous! You can take a picture of it!» Then J.R. and I showed them our t-shirts with the logo and the website address on. Indeed, we get them manufactured regularly and we each have about ten, also for our promotion. Then they burst out laughing and started to snap away the sticker on the floor.
Later, we ate at a restaurant in Hollywood & Highland Center (photo) where we were served by a very nice and funny waiter. With a great sense of humor, he did not stop joking with us with a complicity and a familiarity which was not shocking at all, giving us sometimes friendly little pats on the back. We gave him a good tip and a visiting card «Enjoy the ride». Maybe he came to visit us on the website. In any case, we greet him. He also contributed to make that evening unforgettable... And for me, Dom, it was one of the best birthdays of my life.
As we were about to leave, we realized we had one of the large «Enjoy the ride» magnets stolen on our car. As we thought we would stay just for a few minutes and not go too far, we had not removed them to put them inside the vehicle as usual. The same happened to us in Lienz, Austria in 2012. In both cases, we do not blame those people: we only hope they stole those magnets because they liked them, and that they put them on their own vehicle to travel around their country, thus promoting our website for us and making people who see it laugh or dream. 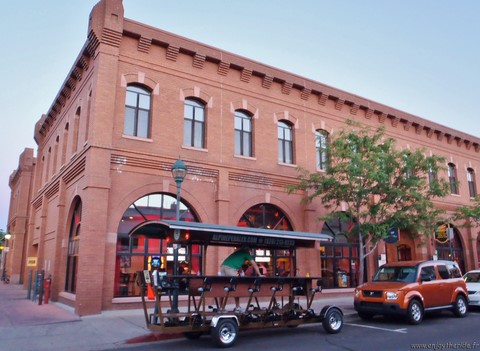 Saturday, June 15th, we were coming from Sedona, Arizona to reach Grand Canyon, next stopping place. We were getting close to Flagstaff. Taken by time and the length of the road, we were hesitant to stop off there. Then, we finally decided to make a simple stop there before we get back on the road. But in the same way as in Hollywood Boulevard, we were caught by the atmosphere and the heat of the moment, and we spent the evening there. Once again, it was memorable. Yet another happy unexpected event. The small student town was celebrating Pride of the Pines - the local Gay Pride - which we ignored. The atmosphere was cheerful and festive, sometimes good-natured, sometimes completely unbridled with a display of eccentricities. People from different backgrounds mixed there in perfect harmony and completely carefree. We had good vibes. We were always in the right place at the right time. Furtive but striking meetings, small hilarious events, everything was linked together in a positive series. We did not care about the road we had to drive, or the very short night of sleep waiting for us before visiting the Grand Canyon at sunrise. We just thought about the present time.
We went into a bookstore and sympathized with the young saleswoman, who studied in La Rochelle, France!.. About 250 kilometers from our region, the Arcachon Basin, derisory distance if we take into account the thousands of miles which separated us from our country at that time. The world is really small!
A few minutes later, we found ourselves in the street in front of a pedal car for... 14 people! The mechanism was ingenious because most of them were pedaling while seating perpendicularly to the road. There was music and multicolored lights that twinkled. A person served as a D.J. We burst out laughing at the sight of that completely unusual vehicle (photo). Then we favored them with a Mexican wave of complicity as they were passing by in front of us, which really amused them.
Then, we had dinner in the Monsoon on the Rim restaurant, among other specialized in sushi. There we ate very well, the decoration was very nice and the atmosphere was very cheerful. We sympathized with a charming and very nice waitress to who we also gave a good tip and a visiting card. We greet her as well.
We will not list all the events that made that evening great. But that small town really appealed to us. And to think we almost did not go there at all! Sometimes a simple decision can change everything in a few seconds. Life can be crazy. If we had decided to drive on without making a stop, we would have never known Flagstaff. We would never have passed that unexpected, surprising and memorable evening.
By writing my third novel «The Twilight Hotel», I chose Flagstaff as a place of action because I needed a town near Grand Canyon and other remarkable natural sites. It was twenty-two years ago. If I had known at the time that I would find myself in that city in 2013 in such conditions!.. 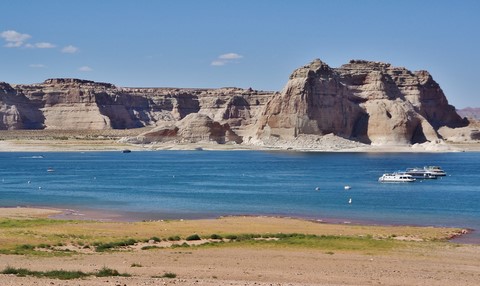 We visited Lake Powell after Antelope Canyon and Horseshoe Bend. We were in its southern part, located in Arizona, more precisely at Wahweap Beach (photo). We had a picnic there, and then we decided to swim in the lake to relieve from the terrible furnace. Once in the water, the pleasure was great. We came into it in the same time with J.R., and then we moved away from each other for a short while. Only just a few seconds later, we managed to crash into each other! He was swimming the crawl, I was swimming the backstroke, and our paths were perfectly perpendicular. We could not avoid the collision. We were afraid of having collided with someone else, so we immediately stood up and found ourselves face to face, and then we realized the full absurdity of the situation, the more as we were the only ones in the water on a wide area. We burst out laughing. Fortunately, there was no harm done.
The most amazing is that we went to the lake especially determined, and we ended up marching unconsciously in perfect synchronization... As if once in the water, which is not our natural element, we lost all our powers...