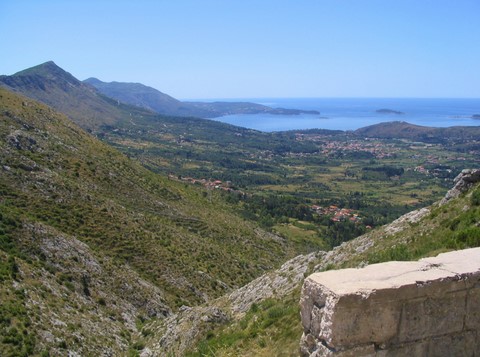 Just a little time after my return from Madagascar, I went to Croatia early July with J.R. For my trip to the «Red Island», I had to take a preventive tablet for malaria, to be specific Savarine. You must swallow one every day. The treatment begins on the eve of the trip, and once back, you must carry on for four weeks.
As a coincidence, I continued to take it in Croatia every morning at breakfast, while my neighbors at table were taking a stunned look at me, wondering why I was having a malaria treatment in a European country.

During our outbound flight to Dubrovnik, us and most of other travelers were particularly restless, caught in the excitement to go to that beautiful country. So, the air hostesses served a slivovitz shooter to everyone who wanted it. They were charming in their uniforms that featured the traditional Croatian dress codes. I had already tasted that Slavic plum-based liquor… delicious but quite charged of alcohol. As a result, it really calmed us down! Everybody was quiet in the aircraft. Some were even having a nap, with a blissed out smile on their faces. And the hostesses finally got some rest and could take a breath.
The day after, we had another slivovitz shooter (again!) to welcome us in the morning just after breakfast! One of the organizers took the opportunity to specify that the law in Croatia is «Do not drink and drive»… just before we get our rental car in the agency! That was a good start!
Undaunted, we drove to the south, along superb winding cliff roads that offered a bird’s eye view of the Adriatic Sea. We finally got lost, but that was a blessing in disguise: indeed, it allowed us to discover accidentally Molunat, very pleasant and typical small fishing-village. Besides, you often discover extraordinary and few visited places that way.
Then, we realized we were not far from Montenegro. So, we decided to cross the border to have a short trip there. We wondered how formalities were. Once we arrived to the border post, we saw two guys slumped in folding chairs in front of a small sentry box. They watched us drive by giving us a wave. We told ourselves that it was finally a mere formality! But, we were quickly disillusioned: indeed, it was just the border post to leave Croatia. The post to enter Montenegro was waiting for us after a hairpin bend: a checkpoint with a military man armed with an assault rifle! It was not the same story! Accompanied by a woman in civilian clothes, he searched the vehicle, asking us to open the trunk. He took our passports, went back to its sentry box to make a call with an old rotary dial phone, and then he joined another sentry box behind us that we had not noticed. It took long minutes. He finally came back, put stamps on our passports and gave them back to us before he raised the barrier. That was uncomfortable, after all!
Then, we headed for Igalo, village which is part of the municipality of Herceg Novi, first town after the border. Along the road, the scenery was still beautiful, but seriously tarnished by blocks of buildings. There, people drove like crazy. We saw 3 material damages along the short distance we covered!
We parked on a shaded parking to go for a walk to the port. We had to face some hostile stares, given that our rental car was naturally registered in Croatia. We thought – right or wrong – that a dispute between the two countries caused by the war was not totally buried. As a result, we did not linger, for fear of finding our car scratched, stoned, or with slashed tires. It is possible that we misread those looks and that we have been too distrustful. We will never know. But we did not want to take risks.

After that short trip to Montenegro, we wanted to continue the adventure the day after going to Bosnia, more precisely to Bileća and its lake (photo). On the eve, we had carefully prepared an itinerary using a road map. What a surprise when we realized once we crossed the border that signs were written in Cyrillic characters! We had done all that for nothing, and had to get by as best we could.
Once we reached the destination, we had a long walk until I end up with a wasp on my head. Nothing extraordinary, except it seemed to enjoy staying there. Then I did what to do in such a case: standing still. Then, a second wasp arrived... Then a third... Thus, I ended up with seven or eight wasps in my hair who did not want to leave. I understood they were attracted to my Fructis brand hair styling gel, fruits-based as the name suggests.